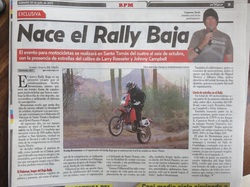 The Baja Rally is Born

The event for motorcycles will be kick off in Santo Tomas from the fourth of October until sixth of October, with the presence of stars of the caliber of Larry Roeseler, Johnny Campbell and Ricky Johnson.

ENSENADA BC - the new Baja Rally is a project created by the American Scotty Breauxman, and will be an off road motorcycle event that seeks to change the philosophy of the sport, without course markers or using the GPS navigation system.

Breauxman revealed that it will be two-day race, Saturday 5th and Sunday, October 6, the first with a stage that will begin at the Balneario El Palomar de Santo Tomás and will end at the Hotel Paradise Colonet.

The next day, from the same venue the green flag will be given in stage 2 and they will travel about 100 miles until arriving at San Quentin where the awards ceremony of the competition will be held at the Hotel Santa Maria.

They decided to use the rally navigation system, as in the Dakar, so the challenge is greater, no gps and no pre-running, so motorcyclists cruising better with the route book, can beat the Baja.

The El Palomar, home of the Baja Rally

Mechanical inspection, rider and media meetings as well as the start of the competition, will be held Friday, October 4 in the El Palomar, thanks to support from Emma Villarreal, owner of this resort.

Villarreal has been contributing to the success of the event, to be a link between the organizer and the police chief of Santo Tomás, this with the purpose of having communal lands available in the areas with a varied routes and without problems.

"Emma (Villarreal) has been as life saver for us with planning our event, not just her, also Sergio Ayala, who is owner of the Paradise Hotel, because we need a team, because working with owners, authorities, ejidatarios, fans, press, only the success can be achieved", said Breauxman.

The Californian, who is a motorcycle racer, also praised the support received from Miguel Monroy and Alfonso Díaz, both directors of the ACOSAQ series of San Quintin, who are part of the staff of the organization.

Shooting Stars in the Rally

A total of 40 riders will be part of the first edition of the rally, including legends of the off-road, as Larry Roeseler, Johnny Campbell and Ricky Johnson.

Also taking part in the new venture, people like the commentator of ESPN in the X Games, Cameron Steele and the pride of the colonia Vicente Guerrero, Gerardo "superniño" Rojas, who has won on several occasions the Baja 1000, 500 and the San Felipe 250.

The Breauxman plan to 2014, is that the Second Edition start and ends in Valle de Guadalupe, counting on an increase in competitors, career days, since in the first line will be 80 with 4 days of racing.

With this it gets started the countdown of the Baja Rally 2013, event which will be an adventure with rally format and has the same goal of all the adventurers who visit these areas, to beat Baja.